DOG LOVER - HUSKIES ARE THE BEST

I didn't have work today... still had to get up early in the morning to wake up kids and take Moya to the vets.

I got up and took a shower and cleaned up a little today. I received a phone call to pick up Moya after her comprehensive exam. Glad to know she is healthy, though she has lost 3 lbs since her last appointment. She could easily gain weight and still be healthy. She is extremely active and that is why she is so slim.

There were a lot of people at the vet hospital and Moya received lots of compliments. She is a beautiful husky. I get a little suspicious of some people when they start asking questions like: "How much did you pay for her?" "Is she a pure husky." As a result I drove home constantly looking in my rear view mirror to make sure that I was not being followed. Aurora had been stolen from the yard when she was 2 years old. We recovered her over a year after.
True husky owners ask questions like: "Do you have other animals?" "How do they get along?" "Has your husky killed any other animals?"
Huskies are known for several things:

They are great runners and will run for several miles without stopping. 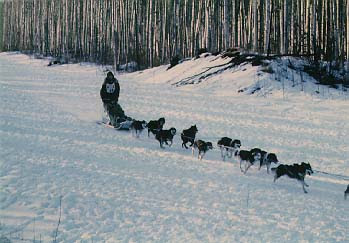 They are great sledders and love to pull.

They love to hunt and will remember where they last saw their favorite prey.

They are pack animals and are happiest when they are with their family.
When we take the dogs for a walk - Moya loves to run and has a tendency to pull me. A harness works great and I can keep her close to me without choking her.
When we get to the park or the ball field I let her loose to run and chase.
Moya still likes to hunt the animals in the backyard. Our best hunter was Aurora. She used to track the gophers in the backyard and could scoop them out of the ground and toss them up in the air before she would kill them. She also caught a hawk taking off in flight from the fence. Aurora knew where all the hen houses were in the neighborhood and would take off from the yard for a regular chicken fix.
She was dubbed the "Chicken Killer" by the pound. She was extremely expensive to maintain because of the usual fees when picking her up.
This past Saturday, we dropped Moya off at the groomers. When she was done, we picked her up and allowed her back in the house. She hung out with us the rest of the day Saturday and all day Sunday. When I picked her up from the vets, she couldn't stand being outside while I was inside.
I reported to Victor: "Moya is healthy and the doctor says she is a little thin. She has also begun howling today, expressing her desire to come into the house."
Victor said: "At least she has learned to howl."
Moya never howled before. Fleur used to do all the howling. Her howl was low and mellow. Moya's howl is a higher pitch that drops to a low pitch.
Moya is a good companion and I enjoy spending time with her. She is mellow for a husky and she does not stress me out like Fleur or Sparky. Fleur too high strung and Sparky too strong.

Moya sleeps in my room and her favorite spot is under my bed on my side or right up against the bedroom door. If Victor leaves the room, she jumps up on the bed and lays down on his spot. It's kind of funny. I laugh when Victor returns to the room. He just gives her the look and states "DOWN." and she hops off.
Huskies can live 15 - 16 years or longer. I expect that I will have Moya for a very long time. Victor and I have learned a lot about huskies and they have become our preferred pet. I am pretty sure that we will replace "Sparky" with another husky when he passes away. That may be some time yet. He is currently 9 years old and is very strong and healthy. He could easily live another 10 years.

As I finished this post, Victor brought Moya back into the house. She is now laying next to Victor on the floor.

You forgot to mention that Huskys don't like fireworks. . . :(

Do you remember Toby our Alaskan Malamute? (similar to a Siberian Husky)I don't think he was pure blood--I think he grew too big for the breed.

Boy, did he like to run. He was an outside dog. I did feel sorry for him during the winter, outside in his doghouse.

He was a cute puppy. But he rapidly grew into "a small horse" who, when he wagged his tail, knocked everything over nearby.

Dogs are the best! I miss Sparky, even though he gets a bit jealous at times. I miss poor Aurora too. She was so sweet.

i remember Toby. I was very sad that we couldn't bring him with us when we moved.

Beauty Emerges From The Darkness

I have been pondering upon the things that I have heard, seen, and felt over the past several months, weeks, and specifically during the pa...

Rebecca's Oasis
I have been governed by one principle for as long as I can remember: and that is to always be truthful. Even at the risk of losing something, I still remain true to this in my life. My father said of me once, that I see things in black and white and that I express my thoughts, feelings, and ideas without a hidden agenda - often expecting the same of others. Apparently, this is a rare quality and most do not understand; creating a divide that I can not cross. It seems that I am standing on the precipice once again; looking across a deep chasm where those I wish to associate with are far out of reach - all because of truth.